Disproportionality is a foundation concept for targeting practice and application. In a 2007 paper, Pete Nowak and Francis J. Pierce assert that traditional conservation measures typically are applied with an emphasis on scientific conditions in the landscape, assuming a large degree of consistency in how farmers apply recommended behaviors. As such, the main object to be ‘targeted’ is based solely on biophysical conditions. 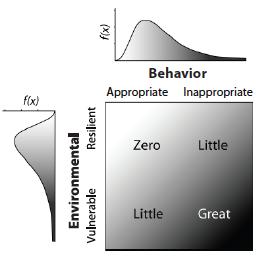 The log normal distribution of both behavior and biophysical impact suggest that a small number of users carrying out detrimental practices on sensitive parcels have a disproportionately high impact on pollutant loads. (from Nowak and Pierce. 2007. The Disproportionality Conundrum)

Instead, they find that both the biophysical and behavioral component of conservation practices follow a log normal distribution, as displayed in the image to the right. In this scenario, disproportionality occurs “when there is a significant degree of asymmetry between the appropriateness of social behaviors and the buffering capacity, landscape sensitivity, or resiliency of the specific biophysical setting where or when these behaviors take place” (Nowak and Pierce, 2007, pg. 108).

The implication of disproportionality within targeting is profound. Beyond the evident conclusion that targeting must take into account behavioral factors to be truly reflective of the cause and consequences of nutrient pollution, this framework can help conservation programs apply concentrated remediation actions to achieve greatest biophysical benefit. A focused conservation strategy that seeks relatively small portions on the landscape that are the most vulnerable can have significant environmental benefit relative to those that can be achieved by broadly applying solutions across the landscape.

The concept of disproportionality is fundamental to targeting. In this piece, Nowak and Pierce place emphasis on human behaviors within agricultural settings. He argues that the most commonly held perception of farmer behavior is that most environmental behavior distribution is statistically normal, and that this shapes recommendations for conservation strategies. As such, conservation strategies are based almost entirely on biophysical factors as farmer behavior is treated as normal and predictable. He argues, instead, that farmer conservation behavior is best represented as a log-normal curve, indicating that, in their words, “when examining a population of farmers… we will find a few saints, a wider array of sinners, and a majority falling somewhere in between” (107). Biophysical sensitivity can be understood to have a lognormal distribution. Therefore, when the inappropriate behaviors correspond with the most environmentally vulnerable land, significant levels of degradation occur. This shows a significant and inevitable social and behavioral dimension implicit in any targeting scheme. It also implies that ‘appropriateness’ is variability across biophysical settings. For example ‘inappropriate’ behaviors on highly resilient land will have little negative environmental impact and thus don’t necessarily need to be an object of targeting. It also implies that effective targeting could be a matter of exerting significant effort and resources on a relatively small portion of land and landholders.

Despite evidence that agricultural BMPs can effectively reduce nutrient and sediment loads at local or field-level scales, heavy investment in BMP implementation has not resulted in significant pollution reductions. The authors believe this to be because: (1) BMPs are often implemented with non-water quality goals, such as wildlife habitat, the location of which may not enhance water quality; (2) Most programs are voluntary and thereby do not reach the largest polluters; and (3) BMP implementation tends to be dispersed geographically and therefore may not lead to statistically significant reductions. The study accomplishes two things. First, it studies which dispersal patterns will result in the most significant nutrient reductions, finding that an aggregated and targeted (versed dispersed and random) approach will create the most statistically significant reductions. Second, it defines a stop points within subwatershed targeting, or the point at which BMP targeting is optimally efficient. They recommend using this stop point to prioritize watersheds, and after the stop point (defined within the study at 29%), it makes sense to move onto the next highest priority watershed.